Formed in 1968 and formally known as The Pegasus Association, membership to the Airborne Forces Association of WA is open to all serving and ex serving members of the British and Commonwealth Forces. Our current membership is predominantly Airborne related with members from the Parachute Regiment, Special Air Service and all associated attached Arms and Corps who have completed basic infantry training, passed P Company and are qualified military parachutists who were awarded their Parachute Wings and the right to wear the coveted Maroon Beret. Membership is open to former members of all British and Commonwealth Forces to come along and enjoy a terrific social atmosphere amongst military brethren with numerous formal and social events throughout the year.

In recent years and due to dwindling member numbers within other ex-British and Commonwealth Forces Associations that have had to lay up their Colours and disband, Airborne Forces Association WA created a Friend Membership category allowing those ex members to join our ranks.

Many of our post war members have been on operations in Malaya, Korea, Aden, Bahrein, Borneo, the Cold War in Europe, Northern Ireland, the Falklands, Sierra Leone, Iraq and Afghanistan.

All enquiries and applications welcome and we would be honoured to have you join and expand our ranks. 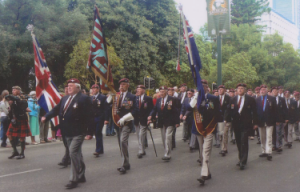