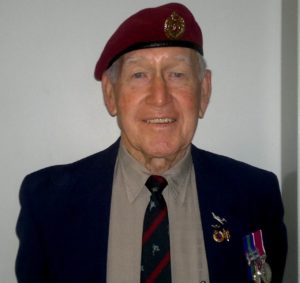 Don Newman was born in Kent, England and lived in Perth, Western Australia 1972-2019. Don Served for 22 Years in the Royal Engineers. After basic training Don spent three years in Egypt-then from 1954-1957 he served in Germany. From late 1957 to 1960 Don was posted to Malaya serving with the Special Air Service “D” Squadron.

After Malaya Don’s service continued with the Independent Air Squadron, going on to be a Staff Instructor for 299 Parachute Squadron and Instructor of Combat Engineering with 36 Regiment.

Don was promoted to Warrant Officer Class Two and posted as the Squadron Sergeant Major (SSM) of 9 Independent Parachute Squadron based at Haig Lines in Crookham, Hants.

Don’s final posting was in 1969-1972 to the Royal School of Military Engineering Regiment in Chattenden Barracks, Chatam Kent in the 150th Anniversary year of the Regiment.