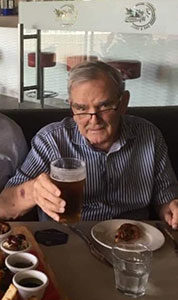 In 2006 Richard wrote a short memoire of his military service entitled “Behind Enemy Lines By Accident” which is now well known to members of the Airborne Forces Association.

In 1952 as a student at the Birmingham Medical School Richard learned that he could earn extra pocket money by signing on with the Territorial Army and thus he joined 45 Parachute Field Ambulance and earned his wings and the right to wear the coveted maroon beret at RAF Abingdon.

After completing his medical qualifications in 1955 Richard was called up for his National Service commitment. Not wanting to be commissioned in the Airborne Forces, having enjoyed his time with the Ordinary Ranks and NCO’s Richard opted for the Royal Air Force for National Service.

Richard soon found himself on his first overseas posting to RAF Akrotiri in Cyprus in anticipation of the upcoming invasion of Egypt by British, French and Israeli forces to return the Suez Canal to its former owners. Almost refusing his first medical assignment to the air base sick quarters Richard made it clear he wanted to be a part of the surgical team at the RAF Hospital. The impasse was quickly resolved and having learned of his Parachute qualifications Richard was assigned to the surgical team of the Middle East Air Force Parachute Rescue Team serving as Air Evacuation Officer and coordinator for potential casualties coming out of the Middle and Far East. Casualties from the short war proved to be light with most casualties being treated aboard British aircraft carriers. This proved to be a relief for many as the chosen aircraft for mounting rescue and casualty evacuation operations turned out to be resurrected Comets following their misfortunes as the first civilian commercial jet airliners.

Just prior to the end of the short war with Egypt Richard’s medical team were advised of an urgent casualty evacuation from a small RAF base at El Adem just outside Tobruk in Libya. An airman had picked up a piece of unexploded ordnance left over from WW2, which subsequently exploded causing significant injury. A Pembroke short haul aircraft was selected for the evacuation mission which was duly inspected by Richard to ensure adequate space availability in the fuselage for both patient and medical team. Richard ordered a large piece of equipment in the middle of the fuselage to be removed which was actioned in no time. The pilot and navigator entered the aircraft, duly strapped in and was cleared for take-off. Once out and over the Mediterranean the Polish navigator came flying through the crew door asking what happened to his navigation equipment. The very piece of equipment that Richard ordered to be removed by the ground crew prior to departure. Flying on compass bearing only the pilot got down to low level and turned South to cross the North African Coast at El Alamein. The plan was then to turn right and follow the only coast road across the Libyan border into Tobruk. They were now in Egyptian enemy airspace and the Allied Forces were still at war. With no fighter escort, no weapons with which to defend themselves Richard and his team were reliant on maintaining radio silence and the expertise of the flight crew to keep them invisible to radar and enemy fighter jets. It proved to be a flight of extreme anxiety and tension which ended with Richards medical team arriving at El Adem without incident and successfully evacuating the patient.

Richard was a very popular and well-respected member of the Association, he served with distinction on the committee for a number of years and more recently served as one of the Association’s auditors keeping us both honest and true down to the last dollar and cent but above all, Richard shared one of man’s greatest gifts, he shared the hand of friendship.

Each year the executive committee of the Association review and assess nominations for those members that have had a significant military career and have made a significant contribution to the ideals, ethics and high standards that the Association strives for and these are usually presented to those individuals during our annual Airborne Forces Day commemorations. These are usually held in June of each year but due to Covid restrictions through 2020 this was postponed to September. Richard was nominated and unanimously accepted to receive an award in 2020. The citation on the award reads as follows:

Awarded on this day the 26th of September 2020 in recognition of your dedication, commitment and outstanding contribution to the Airborne Forces Association of Western Australia in the role of committee member and Association financial auditor. In the finest traditions of the Royal Army Medical Corps and Airborne Forces, you have given of your all on behalf of the Association, maintaining standards and selflessness which comes from that special quality each selected soldier who has worn the maroon beret displays. Your loyalty to friends and colleagues in line with your Unit Motto “In Arduis Fidelis”, Faithful in Adversity continues to be an inspiration to all.
The Association were invited to a ceremony to celebrate the life of one of our members who recently passed away, Dr Richard Reynolds, formerly of 45 Parachute Field Ambulance and the Royal Air Force. Our President Mick Coyle OAM with the Association Standard led the Association into the service with Dave Carr on the bagpipes. Our Secretary Jeff Moorcroft read a Eulogy which he has kindly provided for you to read. It would be great if you could take a couple of minutes to read this to get the sense of such a great man Richard was and what a loss he is to his family and our Association:

‘’ What Manner Of Men Are These That Wear The Maroon Beret

They are firstly all volunteers and are then toughened by physical training. As a result, they have infectious optimism and that offensive eagerness which comes from well-being.

They have ‘jumped’ from the air and by doing so have conquered fear.

Their duty lies in the van of the battle. They are proud of this honour. They have the highest standards in all things whether it be skill in battle or smartness in the execution of all peace time duties.

They have shown themselves to be as tenacious and determined in defence as they are courageous in attack.

They are in fact – men apart – every man an emperor.

Of all the factors, which make for success in battle, the spirit of the warrior is the most decisive. That spirit will be found in full measure in the men who wear the maroon beret”.
Field Marshall Montgomery WW2