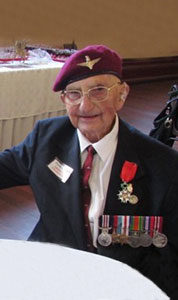 Frank successfully completed selection at Hardwick Hall and later qualified as a military parachutist on course 78 which ran at RAF Ringway in August 1943. The course instructors’ notes record that Frank “Has made satisfactory progress, reliable and keen.”

He made a combat jump into Normandy on the night of 5/6 June 1944 as part of the spearhead force which was sent in advance of the main seaborne landings. The Normandy Landings marked the start of the liberation of north west Europe from German occupation.

The battalion quickly secured the village of Ranville. The following day elements of the battalion including A Company were counter attacked by German forces as they held defensive positions south of Ranville to protect the bridgehead. Frank was later awarded the Military Medal for his gallantry during this counter attack.

The citation for his award records:
“At Ranville on 7.6.44 this company was the forward company of the Battalion. At midday the Battalion was attacked by a company of enemy infantry supported by 8 Mk IV tanks. No. 1 Platoon was in a position astride of the wood North of the crossroads 104727. When the platoon position was attacked 14399494 Private Frank Hall immediately manned a 6-pounder Anti-Tank Gun at the crossroads…….Private Hall had never fired an Anti-Tank Gun before and with his first two shots he destroyed the two leading tanks with the result that the tanks cleared off to the Battalion right flank where they were attacked and stopped by “C” Company. Private Hall’s act initially slowed up the Germans turning them off to a flank where they were finally stopped.”

Frank continued to serve with the battalion and was eventually promoted to Sergeant.

He emigrated to Australia following demobilisation from the British Army, and served in The Royal Australian Armoured Corps from 1951 to 1957.

Frank was awarded the Legion de Honneur on Wednesday 10 June 2015, by the French Ambassador in Perth, Western Australia.

He got his Military Medal (M.M) from King George VI at Buckingham Palace for his action in Normandy.