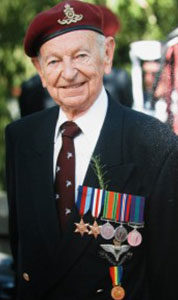 “Called Up”: 15.04.1943
Basic Training in Manchester before being posted on 1 November 1943 to 211
Battery of the 53rd (Worcester Yeomanry) Airlanding Light Regiment RA – main
artillery support for 6th Airborne Division.

6 June 1944: Operation Mallard (codename given to the airborne operation
undertaken by 6th Airborne Division as part of the D-Day landings) – landed
in a glider near the villages of Benouvillle and Ranville and remained in
Normandy until September 1944 when he returned to the UK.

23 December 1944: left UK for The Ardennes – landed near Dinat in support of
6th Airlanding Brigade and 5th Parachute Regiment – returned to UK in
February 1945

24 March 1945: Operation Varsity – Airborne crossing of the Rhine landing at
LZ ‘P’ proceeded through to the Wismar on the Baltic Sea, deployed
continuously until returning to Bulford UK in late May 1945