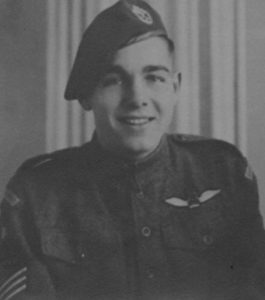 Aged 15, Attested/Enlisted at Warley, Essex on 5th/6th October 1938, as a boy soldier in the R.A.S.C. to learn the trade of Artificer. Signed on for 8 years in the Colours & 4 years in the Reserve.

Following intensive training saw active service in the D-Day invasion of Normandy flying as 2nd Pilot on Operation Mallard, taking off late on the afternoon of 6th June 1944. The Horsa carried a Company of the 1st Royal Ulster Rifles to LZ “N” near Ranville. Back in the UK on D-Day +2,  8th June.

Following return to the UK, promoted to Staff Sergeant & began training for one of the many cancelled operations that finally resulted in Operation Market Garden. On 18th September 1944, flew Horsa Chalk No. 834, as 1st Pilot on the 2nd Lift, the load being elements of the 1st Parachute Brigade & 2 Jeeps bound for LZ “X” West of Wolfheze.

After landing, GPR pilots regrouped with their squadrons. After 6 days of intense fighting “F” Squadron was located in the woods to the North East of the Hartenstein Hotel, Oosterbeek. Sustained mortar shrapnel wounds to the head, chest & right hand on the 24th September. As one of the walking wounded, was captured & made a Prisoner of War on the 25th September.

After being transported by train in cattle trucks with approximately 400 other mostly wounded Airborne soldiers, arrived at Stalag XIB, Fallingbostel on 28th September & was registered as POW No.117848. This was only a transit camp for some Glider Pilots, who were transferred in early October to Stalag VIIIC Sagan. On 8th February 1945, the camp was evacuated ahead of the advancing Russian Army & the “Long March” began. Following 31 days on the road & having walked approximately 600 kilometres in atrocious conditions, survivors of the walk arrived at Stalag IXB, Bad Orb. After a total of 197 days in captivity, liberated by the US Army & repatriated to the UK, arriving on 10th April.

Post war continued to serve with “B” Squadron GPR, Netheravon. During this time, in December 1949, awarded the Parachute Badge. Transferred out of the GPR in July 1951 & completed 10 years with the Airborne at 16 A/B Workshop R.E.M.E.

Discharged from the R.E.M.E. 20th July 1965 at the rank of Warrant Officer 1st Class, having served a total of 26 years & 289 days. During this time, also served in Egypt, Cyprus, Jordan & Germany.

In October 1965 immigrated to Perth WA with wife Lotti & son John, staying initially at Point Walter, before buying a house in Dianella. In 1968 was one of the Founder Members of the Pegasus Association (WA), along with John Hately & other ex Airborne Veterans. Over the years, served at various times as President & Treasurer

Nihil Est Impossibilis (Nothing Is Impossible)