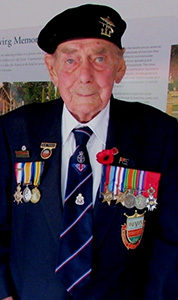 Bob was born in England on 31st December 1924 and joined the Royal Navy, at age 18 in 1942. After basic training, he joined the Combined Operations Unit, and in 1943 was promoted to Leading Seaman Coxswain.

Preparations for the D-Day landings were well underway by early 1944. Bob was involved in the 2nd wave of the Normandy Landings on 7th June 1944. Bob’s involvement was with the Landings at Gold Beach.

“The stormy weather also relaxed vigilance amongst the German troops along the Normandy coast, who mistakenly reasoned that the Allies would not attempt a landing in such bad weather. It was quite bad too. I was a coxswain of one of hundreds of old Thames river barges commandeered by Lord Louis Mountbatten. The barges were modified by cutting away the stern, and fitting a ramp to allow vehicles to drive in; this ramp and watertight door could be lowered after beaching at high water. When the tide ebbed, the ramp and door could be opened and the cargo removed. Hundreds of these barges were modified and the vehicle invasion depended on them for three weeks, until the Mulberry Harbours (temporary portable harbours) were assembled off the Normandy coast. The success of the landings depended entirely on the supply of fuel (in jerry cans), ammunition, medical supplies, food supplies in compo boxes etc. that these ungainly, slow (5-7 mph) barges could manage in ferrying everything ashore, to supply the troops.

Each barge carried a crew of five, a Leading Coxswain or Petty Officer, two stokers, each operating the engine controls and two seamen. We lived in the “foxpeak” of the barge, in a space of 3 metres x 2 metres, with five bunk beds around the living area. A coal fired round stove provided heat for cooking, the toilet was an Elsan bucket type in the hold, and our drinking water was held in small petrol cans, on deck.

I spent about six weeks there, and then was sent back to the UK.”

In June 2009, Bob attended the 65th Anniversary of the D-Day Landings in Normandy, with his fellow Normandy veteran, Gordon Mason. Neither had been back since 1944.

Bob was presented with his Legion of Honour medal by the Ambassador of France to Australia, at a ceremony at Parliament House Perth on 10th June 2015.

Bob joined the Airborne Forces Association of Western Australia in 2015, for whom he had a great affection. He attended almost every committee meeting, and our church services and parades including Remembrance Sunday,  ANZAC Day and Airborne Forces Day each year without fail. Bob played an active role in support of the Association’s Welfare Officer Mr Ted McGreal making numerous hospital and nursing home visits to bring a smile to the sick and infirm.